It has been 10 days since we got back to land life in the windy city. The first couple of days I felt lost. There is so much activity and energy around at all the time. You hear lots of noises in a big city. The sounds of combustion engines from cars and buses gets topped off by the police, ambulance, & fire truck sirens 24/7. First time my father visit Chicago 10 years ago, he woke up in the morning & told me to turn on the news because he thought something must been up last night. He heard ambulances and police sirens last night. I said; dad, welcome to Chicago, you will get used to it, and soon you will not even realize it.
I think, the sirens in big cities puts people in a subconscious plane of fear. Fear factor is a driving force in our world right now, when we fear, we are being controlled easier and we consume more, a perfect approach for a capitalistic system.

It's almost impossible to reach the tranquility we have on water on land. I already miss the peaceful and non stressful life on water. On water, my "stress" is; the wind direction and it's strength, a good anchorage, if the anchor is set properly, are the batteries charged, and what am I going to make for dinner? The stress on land is time, time and time. I drive fast to get to work on time, no time to make food, no time to do laundry, no time to step out of our daily routine, no time for self, no time for friends, we don't have time because we work all the time. On water, time don't really exist. On water there are two times, daytime and nighttime. Regularly, we have to be anchored before night time and we have to set sail to next port as soon as it's daytime. It seems like on land there is not enough time and on water there is abundance of time.
I love Chicago and I am really good at living the land life, that's what I've done most my life anyways, but I prefer to live on water.
Love from Land
Posted by George Kalhouri at 1:45 PM No comments: 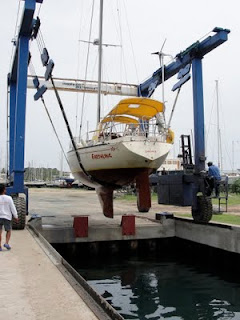 Earthling is out of water and we lived on the boat on land over the weekend. It's a weird feeling to stay aboard when the boat is not rocking. It's like being at a very calm anchorage. The wind is blowing on the branches on the trees around us and it feels like the boat is rocking but it's not. The last few days we have been securing the boat for the hurricane season, strapping it down, taking off the sails, the bimini and dodger is removed, in other words everything on deck has been moved into the cabin.
Today, we had to leave Earthling. It was an emotional moment. I can't believe, I sailed all the way from Chicago to the BVI's. I went 1300 miles through Illinois, Mississippi, Ohio, Tennessee, Tombigbee, and Black Warrior rivers south to the Gulf of Mexico, sailed from northern Florida around the keys to Miami and cruised the Bahamas, Turks & Caicos, Dominican Republic, Puerto Rico, and the Virgin Islands. It took 8 months and around 4000 miles and I did a good portion of it solo. It is a big achievment and maybe that's one of the reasons it feels emotional. I hope everything goes as planned and we can come back in four months and continue this adventure to further destinations.
This morning, we took Air Sunshine's private boat from Virgin Gorda to Beef Island in Tortola, where Adel flew us on his airplane to San Juan. For the first time, I sat next to the pilot in the cockpit for the whole flight, take off to landing. We are so fortunate to have many good friends that are contributing and supporting us. Air Sunshine is one of our contributors and we appreciate their support.
In the next four months, Kelly and I are going to work as much as possible to save up for the next leg. I will keep the blog updated once in a while and update you about other adventures and excitements on land. For now, thanks to everyone that has been taking their time to follow Eartlhing sailor.

Love from the sky
Posted by George Kalhouri at 5:08 PM 2 comments:

There are charters everywhere in the BVI. Most people that take vacations in this area charter a boat, which is the best way to get around & see all the islands. The charters has an important role in the economy for the BVI's. If I ever came down here on vacation I would definitely charter a sailboat.

One of the attractions in the BVI is the "Baths" in the west end of Virgin Gorda where there are massive rocks piled on top of each other in one place. The way these rocks are laid its absolutely amazing. From the water they are beautiful.  Once you are on 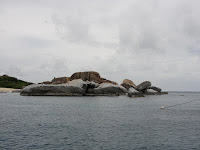 shore you enter the rocks through a narrow passage between two
of these large boulders and the adventure begins.The sea and sun
make there way through the rocks to create dozens of private
beaches or "baths".  You can swim and snorkel between these
massive rocks that go 20-30 ft above & below the water. We had a nice day visit at the baths with our friend Captain Adel. He has been living and flying here in Tortola for 9 years. Adel and I have had other adventures together as well. We drove from Chicago to San Pedro Sula in Honduras 10 years ago. That was a trip I can write a book about.

Earthling is getting hauled out tomorrow in Virgin Gorda. We will get it ready and secure it on land for the hurricane season and fly back to Chicago on Monday.
We now have an Earthling Sailor Facebook page where our pictures will be uploaded and everyone can view them! Please check it out
Love from Virgin Gorda
Posted by George Kalhouri at 2:37 PM 2 comments:

Imagine your just relaxing on the boat in a secluded anchorage and you keep hearing loud splashes coming from the calm water outside. By the time you turn around all you see is a Pelican bobbing up and down in the water gulping down its fresh catch. This is quite entertaining to watch and it's happening every minute if not more and after many tries we finally captured it.
Posted by George Kalhouri at 6:56 AM No comments:

This leg of the adventure is ending in a beautiful part of Paradise. The British Virgin Islands are absolutely breathtaking. There are many great anchorages around these islands and lots to see. 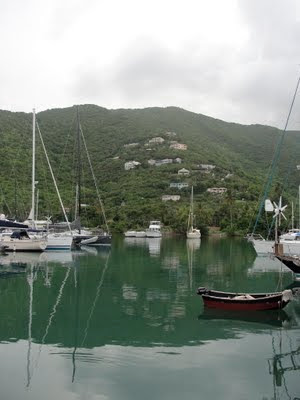 We have only 10days left before Earthling is hauled out for the hurricane season and then we have to go back to Chicago and work and deal with land life until mid October.
We spent last weekend in Jost Van Dyke racing on our friend's boat "Cayennita Grande".
Tony is super competitive and knows sailing well. He can read the wind, waves, current, where he applies different tactics and he has a great racing boat. We came in first place in all the races. We got a few prizes, one of which is a fishing pole. It's so interesting that certain things we lost a few weeks ago are slowly getting replaced from various sources.

This part of the world is unique.
There are 8-10 major islands and some of them are under U.S territory and some are British. The people in  these islands look very similar and their cultures are close as well. Yesterday we were in St. John (US) and we were picking up roaming cell network from Tortola (British), now we are in Tortola and have AT&T. Last time I was in this area I had to pay crazy charges for international roaming, it's insane, maybe this is a loophole phone companies love! You also have to check out with immigration from BVI if you are going to USVI even if it's for few hours. And then you have to check in when you come back to the BVI and pay another fee. I just don't understand why we have to have these political and economical borders.  I think it's wrong and it's time to change it.
What make better sense,  is if all the network infrastructures in the world could be combined under system and our cell phones could work everywhere without us worrying about roaming. I am also looking forward to the day that the whole planet is covered with wifi network free of charge. Some people might think that one cell company covering the world would be monopoly! Yes thats true, but by the time we have one network covering the planet, our economical system will be different. The economical system existing on our planet today limits us from growth. The monetary system was good in the past but not anymore. The monetary system is wasting 60-80% of our resources on the planet. And I believe this system will collapse in the near future and hopefully a better economical system will take place.
My dear reader, we will discuss the economical issue more and more on this blog as we go.
We are in Nanny Cay right now and it's sunny with a little breeze and a little too hot. The heat is slightly uncomfortable. Last night we decided to go for a dinghy ride to cool down. We left empty handed and came back with 2 big bags of groceries free of charge! As we were rowing under this tiny bridge, in the marina, a couple standing on the bridge said hello to us. They recognized us and remembered Earthling because we were rowing. We have not put the outboard on the dinghy since Dominican Republic over a month a ago. We haven't needed the outboard to get to shore and haven't done long distance dinghy exploring. Rowing is good exercise and not using the outboard is equal to saving natural resources.
Last night we end up walking with the couple we met on the bridge toward the boat they chartered. We went aboard to see the boat and since they were headed back to the US, they offered us to take all the groceries that they would have had to leave. What a beautiful world!
Thanks for reading
Love from the BVI
Posted by George Kalhouri at 4:14 PM No comments: