Another overnight, 200 mile passage brought Earthling to Aruba from Los Roques. She sailed with a full Genoa the whole distance. Unfortunately we didn’t get to stop at the other Dutch, ABC Islands, Bonaire and Curacao, since Katherine had to catch a flight back to the U.S from Aruba.

As we were approaching the South Eastern side of the island, in sight were industry and oil refinery. Close to the airport, there was a big smoke and it was the waste land fill. That’s not how you would imagine Paradise! Nevertheless, Aruba has a well known name, it’s like a brand! This Island is wealthy in it’s natural resources. First gold and then black gold, oil, was discovered in Aruba in mid 18 and early 1900s. It has been the major income of the island up till 30 years ago, when tourism took over and it’s the main industry today. Arubans are smart and very good at promoting their island. It’s one of the most recognized vacation destinations in the Caribbean. There are tourist from all parts of the world, mostly South and North Americans and Europeans. Earthling is anchored right by the airport in Oranjestad, small and large airplanes are landing frequently from everywhere. And then there are cruise ships, in and out daily. The cruising community is not big here, and protected comfortable anchorages are very few! The only place to check in with immigration and custom is at Barcadera port and it’s free. But if you decide to stay here more than five days, you have to hire an agent to declare your vessel, which can all be done at Renaissance Marina’s office for total of $70.

The people of Aruba are rich in their culture. People from Netherlands have always amazed me of how open minded and accepting they are of other languages and cultures. Aruba belongs essentially to Netherlands, but Arubans can be white, black, Asian, and Hispanic and the mixture of all. Everybody speak Dutch, Papiamento, Spanish, and English. Papiamento is the local language of the ABC Islands. On FM101.7, I hear mostly Papiamento or Dutch but with a twist of Spanish and English. It’s amazing! I shouldn’t feel bad Mix and Matching Farsi/Swedish/English with some people, like my high school friend Nick. Who is flying in from Boston today for a few days.

Aruba is a relative flat small Island. Usually flat Islands have beautiful beaches. And along the long sandy beaches on the Northwestern side are all the hotels and plenty of good restaurants and bars.

Since we arrived Aruba, the wind picked up and it has been blowing constantly 20-30kt. The predictions for the next seven days are the same, so Earthling will stay put here till the wind and waves come down before sailing to Colombia.

Love from Aruba
Posted by George Kalhouri at 7:09 AM 7 comments:


This is one of the wonders in the Caribbean well worth to visit. This place is like the big brother to Tobago Cays. In the Los Roques National park, there are 300+ small islands, sand dunes, and patches of land in the middle of nowhere. You can find hundreds of deserted anchorages, where you snorkel off your boat and explore underwater world. This is a remote destination for wealthy Venezuelans, there are no ferries or cruise lines, the only way to get here is to fly your personal jet or take one of the small airplanes from Caracas or Margarita or the Earthling sailor way. This place is so untouched that one could wonder around for a long time before getting tired. In matter of fact next time my path goes by here, I will spend an extended period goggling around Los Roques.
It was nerve-racking to enter this area! All you see approaching from east is two large boats that are sitting on the reefs and they have been sitting there for a long time. It’s difficult to see the reefs if you are entering from east at sunset and a reliable GPS system is vital. Thanks to the Garmin, everything is precise. It’s helpful to have someone stay on the bow to spot out reefs. We anchored right pass the long reef and It feels like being in the middle of the blue marble. It reminds me of Antigua’s Nonsuch Bay and Tobago Cays. The wind is constantly blowing and charging the batteries through the wind generator. All you hear is 8-10 ft waves clashing on the reefs as we are sitting in a calm waters a few hundred feet from them. The water is different shades of blue, green, and brown. As the clouds cover the sun and sway around the sky all the colors gradually change to a lighter or darker shade. This is part of paradise that only a few visit, I hope you can see it if you wish so!

The main Island and the only town is Grand Roque. That’s where the airport, stores, and civilization is! When you enter this town, specially if you have been at sea for awhile, it feels like going back in time! The architecture is Spanish/Mediterranean, the roads and streets are all sand, there are no cars, and during fiesta 2-5pm, it can literally be a ghost town. People walk around barefoot and there are lots of kids. Many of the houses on Grand Roque are Posadas (guest houses). Historically, locals have been hospitable to outsiders. In Chris Doyle’s Cruising Guide book from early 90’s, it says that the locals can make food and even give you a place to sleep if you need it. Now that has changed to charming elegant Posadas. All of them have a bar and kitchen for their guest and reservations can be made for dinning in. Some of the Posadas are absolutely magnificent and peaceful, decorated with pretty flowers and open ceilings and doors! At the Posadas you will find people that speak fluent English but it is useful to know basic Spanish.

If you are visiting Venezuela with US Dollars, make sure to negotiate the exchange rate. At the bank the rate is 4 Bolivares to $1 and in the stores you will get anything from 12 to 25 Bolivares. Therefore things can become very affordable for cruisers with foreign currency. We stock up with local beer, Solera, $11 per 24 case in can, cheapest so far in the Caribbean. Everything is made in Venezuela, even if it’s not made here, it will be labeled as if it was!
The only hills are on the main island. They are visible from miles away and really easy to hike up to, where you get an excellent view over the archipelago. I’ve always wanted to visit Venezuela and for now this is all the taste I get from this country.

Over a week ago we broke our ties to civilization and left Chaguramas in Trinidad. Once anchored in Scotland bay, a moment of peace and relieve surrounded our ambience. Scotland bay is at the Northeastern part of Trinidad and the only way to get there is by boat. Hills and mountains enclose the bay and there will not be a dull moment of birds chirping and flying around. This anchorage is best if you just come in or leaving Trinidad or want to be deserted. We enjoyed the tranquility before setting sail for the longest overnight passage since this voyage started in Chicago. Shortly after entering the Venezuelan waters, the Venezuelan Navy ship (Ewkuana) contacted us on VHF Radio to identify ourselves. They asked various routine questions and at the end thanked for our cooperation. After all It’s good that somebody keeps track of you and where you are going!
The new trolling fishing pole was put out for the first time and guess what, it hooked a large King Mackerel! Since we could not store this big fish, we had to fillet it under way and also made a fresh meal.
Earthling has never been as ready as now to make long passages, 188 mile distance took 29 hours, and recorded all time top speed of 11.6 knots. The currents in these waters are between 1.5 to 3 kt and with the wind on your back, easy and fast running. However waves can occasionally build up after windy days, we surfed on some 10 footers, winds were never over 20 kt during this passage.
Dolphins escorted Earthling just after departing Trinidad and greeted us when we arrived Isla La Blanquilla, Venezuela. Playa Yaque on the eastern side of the Island is definitely a piece of paradise and a great place to anchor. The long stretching white sandy beach is tranquil and deserted, there are no houses, constructions, roads, or wifi :-) The water is so clear you can see 25ft down and it is constantly changing colors as the clouds dance around the sky. Now finally, It feels like cruising and traveling to distant places.
At the arrival to Isla Blanquilla, we treated ourselves with a favorite persian dish (Sabzi Polo Mahi) and ate some more of the catch. And there is at least another pound of the fish in the freezer.
Unfortunately, we did not get to interact with any locals on this island even though there is a little town with a few hundred people and the coast guard never visited us! But donkies cross our paths ashore and it seems like they have a higher populations than humans. During the three days in Blanquilla, we saw three other sailboats and a few fishing boats. 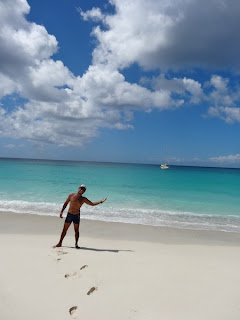 The visit in Blanquilla ended with a bonfire on the beach. Bonfires are always soothing, in addition we have not been able to deposit trash and all the plastic was put in the fire. The rest of the trash such as aluminum and glass breaks in pieces and thrown in 1000ft+ water during passages.
One hundred twenty miles from Blanquilla is Los Roques, a Reef Wonderland, where we are currently anchored and an update about this amazing place will follow within the next week.

Love from Deserted Islands of Venezuela

Posted by George Kalhouri at 12:10 PM No comments: