Minor Casualty Aboard - Part One The last few days in Dominica have been great up until yesterday when there was an unfortunate incident. Kelly and Nico swam to shore to jump off the rope swing that  hangs from a tall palm tree on the beach. Kids and adults have been swinging back and forth on this swing since we’ve been here and attracted us for something fun to try. A few minutes after they were ashore, I went up on deck to take some pictures of them on the swing. We are anchored only 150 yards from the beach and from a distance I saw Kelly laying down surrounded by Mike, Rebecca, and Nico. It just didn’t look or feel right! I jumped into the dinghy and zoomed to shore. It was clear that she hurt herself. She had jumped off the swing into the water and landed on her feet on the hard sandy bottom. When I got there, she was in pain, but tried not to make a big deal out of it. We came back to the boat, iced down her foot, kept it elevated, and gave her 2g of Ibuprofen, that we later realized was expired and hadn’t even worked. Her foot was swelling up by the minute... we had to go to the hospital. Here we are in a small town (Portsmouth) in a foreign country and no insurance! Nico and I somehow got Kelly in the Dinghy, motored to the fisherman’s dock, and took a cab up the hill to the clinic.
We were the only people other than the one nurse, in the clinic. The doctor was called in to check on Kelly. He had good news and a bad news! The bad news was that she most likely had a fracture, but the doctor could not determine that since there were no x-ray machines in this location. We had to go to the capital, Roseau. The good news was, the ambulance would take us to Roseau and the medical system here in Dominica is free for everybody, even for non-national visitors.
It’s six o’clock in the evening and we have to travel approximately 50 miles away. I think to myself... How long is it going to take? How are we going to get back? I’m hoping that it’s just a sprain and she will be good and healed within the next few days. The ambulance driver said he will wait up to 45 minutes for us while we are getting the x-rays. He also said, if it takes longer, he has to leave back to Portsmouth since he is driving the only ambulance they have in town! While in the hospital in Roseau, they were very kind and tried to help us quickly so we could go back with the ambulance. But as you can imagine, we aren’t the only people that need an x-ray. Plus the doctor needs to look at them and determine what the problem is. It just didn’t seem like enough time in a hospital with people on each side of the hallway all needing assistance. There are no computers here for record keeping. They keep a few big file cabinets that holds all of the patient records. There was only one fee of $160EC ($60) for the x-ray and it had to be payed in advance. I didn’t have enough cash and the credit card machine at the cashier was out of order.  The gentleman at the cashier was so kind and accepted my assurance to pay the hospital within 7 days. He printed out a receipt for the x-ray department showing that the payment was received. They took four x-rays of Kelly’s foot. Now, all we had to do was wait for the doctor to look at them and hopefully tell us it was ok. At this point, we have been at the hospital for a little over 2 hours and the ambulance driver was waiting up until now. Sadly, he got a call and had to go back up to Portsmouth and pick up a patient. He said the ambulance would come back to the hospital in Roseau and could bring us back to where our boat is in Portsmouth.
Finally, the doctor came in the office for 1 min, looked at the x-ray, and said, her heel is broken. Luckily, everything is still in place so no surgery was needed, but she needs to be in a cast for 6 weeks!! In cast for 6 weeks on a small boat doesn’t sound convenient!
Two medical students from Ross University put the cast on Kelly’s leg from toes almost up to the knee. Ross University is an American Medical School and has a campus here in Dominica. Many of their students do their apprenticeship in Princess Margaret Hospital.

It’s a little after 10 pm and now we have to wait for the ambulance to come back from Portsmouth. There are no buses at this time and a cab ride, even if we found one, would certainly exceed our budget. 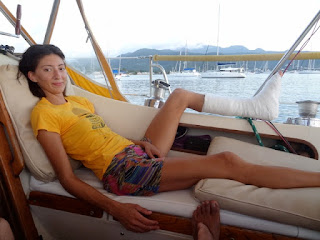 Dominica has seven potentially active volcanos, so it is very mountainous. The ride from Portsmouth to Roseau is up and down several hills and usually takes 1.5 hours. In the ambulance ride to Roseau it took us 1 hour so I was trying to figure out when the next ambulance would be back, if he was just picking up a patient and coming back here. After an hour and a half of patiently waiting, we saw an ambulance dropping off a patient. I asked the driver, “Did you come from Portsmouth sir?”. He said, “Yes”. Then I asked, “Are you going back?”. He said, “No”. I mentioned for him that we have been waiting for an ambulance to drive us back to Portsmouth. Then he asked, “Are you with the lady with the broken foot?” He then explained that he had met the ambulance from Portsmouth half way to transfer a patient because in Portsmouth they had another call to bring another patient to Princess Margaret Hospital. So I asked, “When did the ambulance leave from Portsmouth?”. He said, “JUST NOW”. We’ve now learned that in the Caribbean, “just now” could be past, present or future. In this case, it could mean anywhere from an hour to three!
By this time, Kelly’s pain was starting to come back and we haven’t had anything to eat since lunch, 12 hours ago. She couldn’t take any Ibuprofen since her stomach was empty and there is no food available. During the time we were waiting among the sick patients in the emergency hallway, the nurse must have felt bad for us and called Portsmouth hospital to see where the ambulance was. Each time she asked, she was told the same thing... that the ambulance left “just now”!
We waited until 1 o’clock in the morning when ambulance #53 finally showed up. The story gets better! The ambulance driver may have been a race car driver in the past, although, we were not in a race car. He was driving this Hyundai minivan like there was no tomorrow. Shifting up and down on the automatic transmission, but manually! It’s as though he was mad at the vehicle and it needed to be punished! At some points he exceeded 85 MPH downhill through these small villages. I was holding on with both hands to not fall on Kelly, next to me on the gurney. The drive back to Portsmouth took only 35 minutes.
I had to carry her to the dinghy, since she didn’t have any crutches. We were finally back on the boat safe and sound a little after 2am.

View the photo album of Dominica on fb page

Posted by George Kalhouri at 6:20 PM