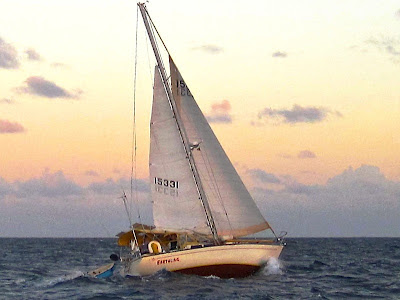 The name Earthling means the citizen of the planet Earth. I learned the word a few years ago on the discovery channel. This is when I knew what my future boat would be named. In the greater picture, all humans on earth are considered Earthlings before anything else such as:  heritage, nationality, race, color, gender, religion, sexuality, status in society, ethnicity, etc.

Originally, I was looking at a 40+ foot ketch to live aboard and travel on. There were a few in the market that needed a lot of work or were out of my price range. Then I saw “Earthling” For Sale at Crowley’s Boat Yard in Chicago. It was love at first sight. I knew this would be the boat that sails me away. After a month and half of negotiation, everything came together and she came into my possession.

She is a 1979 Islander 36’ sloop. Islanders are made on the west coast of the United States. They are great racing/cruisers. The Islander association still organizes races in the San Francisco Bay area. She is considered an ocean worthy vessel and people have circumnavigated around the world on Islanders. Just a few years ago, 16 years old Zac Sunderland set the record for the youngest solo circumnavigator on an Islander 36’ named “Intrepid”.

Some people believe that a boat name should remain the same and not be changed. Otherwise, it might not bring good luck. I look at that as a superstition! I have several names and nick names myself, so I believe she can have different names as well. Her original name when she was built, in Irvine, California, was “Yankee Peddler”. At the time of purchase from the King family in Chicago, she was named “Rascal K”, and now she is “Earthling”.

Earthling has gone through many restorations and upgrades. The biggest repair was replacing the stringers. The old stringers had rotted and had to be replaced before going offshore. This project took 4 winter months while the boat was on the hard and most of it was accomplished by my friends.

Since the purchase in June 2009, I have not paid a penny for labor. I am so thankful to have amazing friends who have been willing to help me with many of the jobs. Everything is done with help of friends and a lot of it is done as I go!

Before setting sail from Chicago in October 2010, she needed many things.
This is a list of all the upgrades and refits on her:
Garmin GPS navigation System & Radar
Stove and oven conversion from CNG (Compressed Natural Gas) to propane and added two 10 gallon Propane Tanks
Converted cushions inside and outside
New refrigerator DC compressor
Anchors, Carrier, chain, rode, and finally the windlass in 2013
Auto Pilot
Solar Panels
Wind Generator
High output alternator
Dinghy and Outboard
Converted the electric macerator to a manual head
Tow rails leak repairs
Customized Cabinets
And many more ...
Cockpit: The cockpit is quite spacious and has had up to 9 people sit here comfortably. We can take quick naps when under way and occasionally, people have slept here until sunrise. Off the stern we store the propane, outboard, trolling/fishing pole holder, small propane grill, fillet table, and 2 horseshoe rafts.  The dodger and bimini have attachments for full enclosure. However, the canvas on the dodger and bimini have faded and leak after a heavy rain. There is also a home made/detachable tarp installed on top of the bimini that collects rain water. All the sheets/lines run into the cockpit so there is no need to step on deck. The cockpit is like the patio and we eat most breakfasts and lunches on the fold out table.


Companionway: The companionway is one of my favorite designs on Earthling. The top hatch slides back enough so you can walk down naturally without “climbing” up or down into the cabin like most other sailboats. The big wide steps give you a spacious open feeling when you enter the main cabin. These steps are removable for accessing the inboard engine and battery box.

Navigation station: I spend a lot of time sitting here. This is a part of the boat that could be designed better, with the control panel closer by and the stool more comfortable. Ship to shore VHF radio and some other electronic equipments are located here.

Main Cabin; The main cabin can sleep 3 people. The port settee folds out into a full size bed for 2 people. The table stows away completely and can fold out halfway and full.  Seats 5-6 people. This unique design makes the main cabin very roomy. Under each bench are the two 30 gallon water tanks. The seat cushions were were reupholstered with the one solid piece of thicker foam. Originally, the cushions were 3 separate parts, like the back rest. The maximum head room in the cabin is 6’2”. 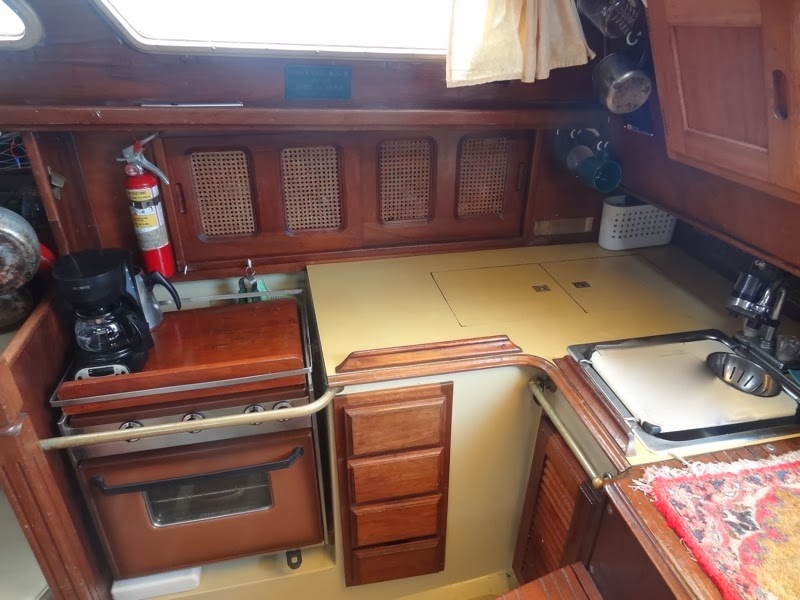 Galley: Every meal is prepared here in the “One-Man Galley”. Underneath the counter is the top-loading  refrigerator and small freezer box. There is a whole oven pivots and it has a 3-burner stove. It was converted from CNG to propane last year. The sink is small, but deep and located between the companionway stairs and counter top.
V berth: All our clothes are stored in netting hammock on either side of the V-berth. The V-berth is raised higher and it makes the bed space large but you have to step up on a stool to get in. It sleeps 2-3 people.

Head: The head has a classic look surrounded by Honduran mahogany and a large mirror. The faucet lifts out for taking showers. However, mostly we use the sun shower outside for showers. The toilet bowl and flush were replaced last year after the macerator stopped working, read the story here.


Aft berth: The aft Berth is designed to sleep one crew, but since Earthling is live aboard, it’s used to store tools and other equipment and it’s considered as the garage. 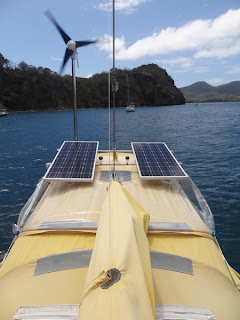 The electricity on Earthling is mostly gained from wind and sun. The wind generator was installed with the help of my friend Lee and Ali in Miami in Feb 2011. It’s an air breeze 200 watts and starts charging at 7 mph wind. It’s specially great during night passages when many instruments are on. I think it’s necessarily to have a combination of wind and solar on live aboard sailing vessels.

The solar panels are 170 watts and in a clear sunny day, I have recorded 14 amps on the controller. They were installed December 2011 in St. Croix, USVI.

The original alternator was replaced with a High Output Alternator Balmar 120 amp in St. Petersburg, FL in January 2011, with a help of a Archie at Maximo Marina.

A new battery box was installed with five 12V deep cycle batteries at 120 amp hours each.