A Trip to India

India has been one of the countries on the list to visit for a long time, and the time for that arrived on January 1st 2018. I always find the first day of the year a great date for traveling to a distant destination.
I received an invitation from my Indian college friend, Nasser, for his wedding in Hyderabad. The time to the wedding was short and it did not seem possible to make a trip to India! After some consideration, I thought that this is the best opportunity and reason to finally visit this great country.

India is so diverse than the rest of the world, it feels like being on a different planet. There are 1.3 billion colorful people from various religions, cultures, that speak different languages living in one vast country. Rural areas are well populated. The music in the cities are the sounds of the horn of vehicles. What’s fascinating is that they all live in harmony and peace with each other. Very rarely we encountered people loosing their calmness and tranquility. A large portion of the population in India is living in poverty and in my point of view they were all compassionate and accepting of one another. Even though they might be considered poor, but they are still happy!
India is a great example that it is possible to live all together in harmony!

Hyderabad is one of the biggest cities in the southern India and it is the capital of Telangana state. It is known for the “City of Pearls” historically it has been a center for pearl trading. The common language of this state is Telugu and Urdu, most people speak Hindu as well! The most practiced religion in this area is Islam but there are also many Christians and Hindus.
When I arrived in Rajiv Gandhi’s International Airport in Hyderabad and saw the public signs, I was surprised that were four languages on the signs and besides English I also could read the language of Urdu. Urdu’s roots come from Indo Iranian language, and it is a mixture of Hindi and old Farsi!

Spending time with our Indian friend and his family in their household during the wedding preparations was a great experience. We felt part of the family and were included in all the events. On the Wedding day we first attended the mosque in Muslim traditional clothing, prayers were sung, and vows were signed. After the mosque, the groom’s immediate family went to the bride’s house and the two families celebrated the union. At this point the father of the bride put his daughter's hand in the groom’s and the newlywed separated from her family and went to her new home. This traditional event was an emotional moment of separation and union, some family members were in tears and sad that she was leaving and at the same time they were happy that she was married. The wedding evening ended with extended celebration at the Nasser's house with plenty of delicious Indian food.
The second day was the reception dinner at an outdoor banquet hall. Indian weddings are known to be large, Nasser’s reception was considered relatively small and only 700 people were attended. Here the men wore suits and ties and women wore the traditional colorful dresses. This was a customary Muslim wedding where men and women are usually celebrating separated in different halls. But the night ended up all mixing together. I am grateful for this amazing opportunity to celebrate a wedding in India.

The air everywhere in India seems hazy and I still have not fully understood why! It’s not the humidity or the pollution. Indeed India has the spiritual energy in its air! Maybe the haziness is the spiritual doubt of our world today!
There are temples all over this country and many people visit them daily. At the temple you give a charity and they color mark your forehead/third eye with a dot, which is a sign that you visited the temple that day!
After the wedding in Hyderabad, my Chicago/Swedish/Persian college friend, Nariman and I flew to northern India in the foothills of Himalaya to the town of Rishikesh. This town is known as the capital of yoga and meditation in the world. Many yogis and spiritual masters have spent extensive times here, including Ghandi, Yogananda, and they are even believes that Jesus was in this part of India during his teenage life! The city is holy; no animal meat or alcohol is consumed or entered this area. People are calm and tranquil and the vibration of peace is in the atmosphere. The largest river in India and one of the main rivers in the world; the Ganges starts right here in the Himalaya foothills. At it's source the river is crystal clear and pure! Looking at this river from the ashram and walking by it made us so relaxed and calm. Rivers are like veins in our bodies and Ganges is like the Aorta of planet Earth!
Everybody is welcome and free here, you see people from all countries and nations. Even the animals feel free here, Cows, monkeys, and dogs, are roaming on the streets. And no body bothers anybody else, however, the monkeys can be vicious!
One day I was walking around the streets in Ram Jhula and bought some popcorn, as I was eating it I encountered a cow that came towards me and wanted some, he got some popcorn and walked away. The same day I bought fresh made cookies and as I was crossing the walking bridge I realized that a monkey was trying to snatch the cookie bag from me! He was not gentle and made me slightly scared. I had to run away and go around people, scooters, and cows on the narrow bridge to loose him! People were laughing looking at me being chased by a monkey! Afterwards, I thought, It would have been easier to just given him a cookie or two! There are actually street vendors that sell food for the monkeys and cows. Street vendors are common in India, they sell everything you can imagine!

I also have to add that India is not the cleanest country, you have to really watch where you step your feet! Ganges is pure and clean at its source but gets filthy by the time it reaches the Ocean. Perhaps we could compare it to our body, it’s clean and pure at birth and get filled with junk/rubbish throughout life!

In Rishikesh, we resided at an ashram for one week. Ashram is a spiritual hermitage and kind of a monastery. You live here full time and learn how to practice Meditation and yoga daily from 5:30am to 8pm.

It’s recommended to participate in all classes but not mandatory and you are free to go outside the ashram and visit the area but must be back by 10pm!
All the food served was vegan. The cost of staying in an ashram is around $20 including food, room, and classes. India in general is very cheap!


There are many ashrams in Rishikesh area, some small and some bigger ones. Yoga Niketan was in the hills and more deserted with excellent view over the Ganges. There are also other spiritual events outside the Ashram in the city such as the Aarti. This Hindu ritual was held in a couple of various places by the river at sunrise and sunset. The ceremony included singing prayers, offering light and appraisal to the Hindu gods and life, making wishes and light a candle and set it adrift on the river!
The short period in Rishikesh has helped me to change my life. Yoga and Meditation has become a daily routine in 2018.
Yoga is a form of exercise that helps one with physical and mental balance. It stretches your body and helps the flow of energy in your chakras. This flow of energy supports one during meditation to rise in vibration. Yoga and meditation are supposed to be practiced together!
Meditation helps with calming down and focusing on one self. It is the primary way to connect to the essence within! The more pure and clean the body and mind are, the more effective is meditation! The essence of life is One and it’s in all of us!

I feel more happy, relaxed, and peaceful than ever! Eating healthy food, vegetables, fruits, and nuts in proportion is the daily diet. And consumption of alcoholic beverages and animal products are eliminated from the daily routine.

I feel light and I am enlightening! I am aware and rising in awareness! I am more clear, compassionate, understanding, accepting, respecting, content, and prosperous than ever!
I am grateful and humble!
I wish so for all of you!
This road is long, it’s a life journey!

May the new year bring more peace and love to our planet and may the cosmic intelligence fill every human on earth with peace and love! 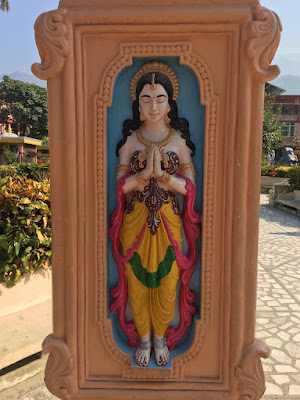 Happy New Year
Thank You for Reading
Love from India
Posted by George Kalhouri at 5:17 PM