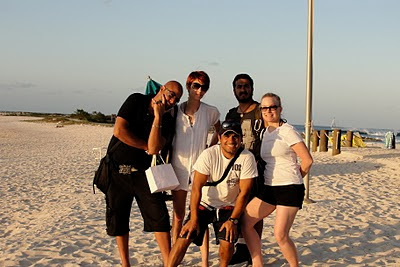 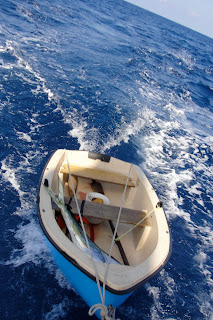 We made it from Bimini to Chub Cay 18 1/2 hrs passage under sail. Outside Chub Cay we anchored off a deserted resort. There was only one employee he has been there 3 years just to clean the pools. We made a fire on the beach and grilled hot dogs & potatoes. The pool shower was with cold water but still a blessing.
On Sunday we sailed to Nassau, 35 nm under sail. We trolled and caught a 25lb fish. We didn't know what kind it was, it was so beautiful, blue & green fins w a gold & yellow body but later the natives told us it was a Mahi Mahi and a good catch. We were so excited. It was so large we could only keep it on the dinghy. When we were filleting it, there were two more fish inside which we fed to the seagulls. We had enough to feed the 3 of us plus the two ladies On their way, Kelly from Chicago & Sondra from Dallas. 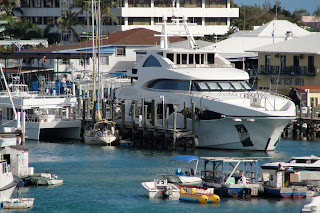 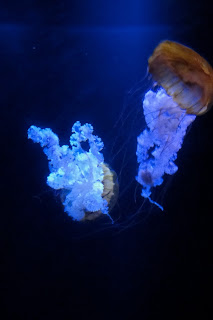 Nassau is a good place to stock up with groceries and make a visit at the Paradise Island. When the ladies showed up we went to Atlantis on Paradise Island. Atlantis is a 5 star resort with a Casino and a Marina and a beach and many other entertainment. In the Marina there are multi million $ yachts docked. Navid visited Atlantis in the morning and he somehow sneaked us inside the hotel to see the Aquarium and use the pool area and the private beach.
We have a full house now and it just makes it better. Before we went to bed Ali & I decided we should do a quick remodeling. So it was 10pm and I pulled the saw out to cut the end part of the pull out bed. The electric saw was out of battery so Ali went at it with the rusty hand saw. In the end, we now have more room when coming down the stairs with the bed pulled out. We are docked at TPA Marina in Nassau and we will be here till Thursday when Ali and Sondra leave back to Dallas and Navid back to Chicago.
Yesterday we daysailed and anchored off Paradise island. Rest of the Mahi Mahi was prepared for dinner and it was as good as when it was fresh.

Ali snores so loud the crew decided he should sleep out in the cockpit by the helm. Whoever snores loud in a full house has to sleep in the dingy next to the Mahi Mahi next time.
Posted by George Kalhouri at 3:06 AM No comments: 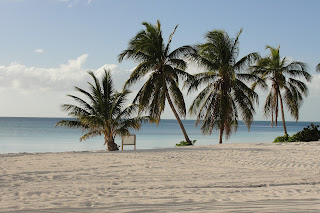 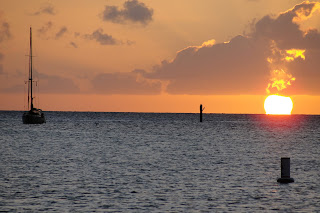 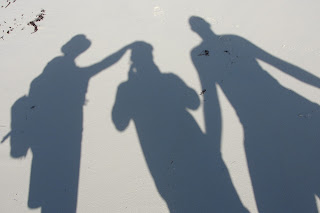 The water is so clear you can see 20 feet down. It feels like you are in a big aquarium. We crossed the gulf stream on a north wind and made it to Bahamas. The passage wasn't as bad as I thought it might been. We saw few 8 footer waves and it was choppy in the middle of the stream. In general the passage went pretty smooth.
Today we checked in at the immigration and custom and payed the fees $$$ for cruising permit and fishing permit.
Bimini is the closest island to the U.S, it has less than 2000 in population, and they are all dependent on the tourism.
All the natives are so hospitable. Last night Navid and I went to couple of the natives houses where we met the oldest person on the island, the grandpa was 98 years old, healthy and still rode his bicycle. Everybody is trying to sell you something, you name it, they will find it. Right now is slow season for Bimini, high season is May to August, when lots of Floridans boat over for the weekend.
I'm glad to have Ali and Navid aboard. I've known Ali since I was 15-16 years old in Sweden. He is a straight forward guy, and he is extreme in his own way. He has all kind of survival gadgets. He brought his belt that he use to have in the marine. This belt holds 2 knifes, LED head light, water bottle, hat, gloves, 2 shackles, safety harness, compass and a torch.
Navid is a friend from Chicago, he is extreme in his own way, and 180 degrees different from Ali. He has his belt also, but it's a D&G belt. Navid misses his hair dryer even though he is bold. Ali has his boots on all the time because his feet are too sensitive he says. He brought 15 different underwear and socks. On top of that none of them have any sailing experience. This is a very entertaining crew.

Tomorrow we are planning to sail toward Chub Cay which is 75 miles east of here. 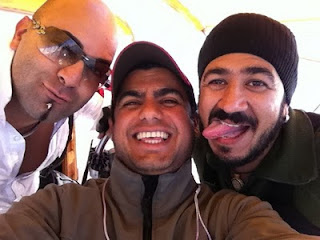 Posted by George Kalhouri at 5:47 AM No comments:

The stay in Miami has come to an end. I have been working on the boat everyday since I got here. The wind generator is in place and producing energy. The fridge compressor is changed and it's working great. Each of these projects took 2-3 days to accomplish. I am so lucky that my friend Ali joined me last week and helped with all these work. Last Friday, Lee drove from Everglades to Miami to help with the wind generator installation. Few days ago my friend Navid flew in from Chicago to join us till we get to Nassau. Things are in place and we are ready to leave early tomorrow morning. We have been praying for a South or West wind, but we will make the Miami Bimini passage on a light north wind. Crossing the Gulf Stream on a North wind can be dangerous. We should be ok as long as it's not more than 15-20 m/h.
Hopefully we should be in Bimini, Bahamas Tuesday evening. I don't know how reception will be in the small islands but we will have access to wifi by next Monday in Nassau.
Posted by George Kalhouri at 8:01 PM No comments: 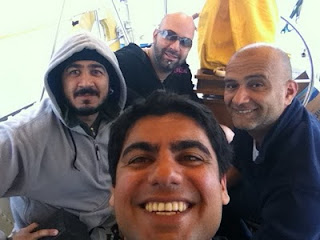 It has been a great week in Miami. I'm anchored in front of my friend Hamid's apartment on 79th street. The way the boat is set up is excellent. I have access to a little dock 10-20ft off the boat, there is a pool and jacuzzi on the rooftop, and Hamid drives me on his motorcycle everyday to buy supplies for the boat. It can't be better than this.
The engine is fixed and running. I took the fuel filter apart, tapped a bigger thread in the base of the air bleeding screw, and the Diesel engine started after couple attempts. Few new equipment should be here today and tomorrow, such as wind generator, fridge compressor with a freezer compartment, and propane conversion kit for the stove. On top of that my buddy Ali joined me from Dallas yesterday to help fixing things this week and we should be ready to sail to Bahamas next Monday.
Projects, big and small are never ending. Living on a boat and cruising comes with constant boat maintenance. It is more than a full time job, but the result of it is "great pleasure".
Posted by George Kalhouri at 6:01 PM 2 comments: