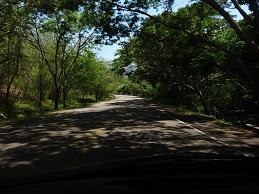 It was almost two months ago when Earthling entered Colombian waters, since moving along the coast and with Katherine arriving nearly two weeks ago, we were eager to venture inland to see the real country of Colombia. An opportunity came up to rent a car so we decided to take a road-trip and explore the North Western part of the country. Road-trips are another favorite way to travel the world. Starting from Cartagena, we drove 300km to Valledupar to visit our friend Paola for the weekend. From there we continued North towards Riohacha, down the coast through Santa Marta, up the mountains into Minca, over the rivers and swamps outside of Barranquia and back to Cartagena. In five days a total distance of 1200km (750miles) was traveled.
A road-trip in Colombia is fun and yet adventurous but it's not as easy as if one were in the U.S or Europe. Rental cars can be expensive since its not a custom to drive or own a car here. One can rent a newer compact car from a major company for around $110 a day with limited mileage or an older car is available from an owner operated car rental for $55 a day with unlimited mileage. The second option is more economical but comes with a higher risk and you might not get any assistance if you have mechanical problems while driving cross country.
Valledupar is located on the East side of the Sierra Nevada Mountains. The climate here is much different than the costal cities; less humid but more rainy than Cartegena. Our friend Poala suggested we visit a few of the many rocky rivers outside Valledupar. Katherine, Paola, and I spent a whole Sunday exploring these rivers and its vast nature. At the end of the day as we are driving back, our Red Chevy Aveo started making some unusual sounds. I recognized these noises when the car was picked up but now they are only getting worse. After returning home, Paola called and informed the car owner assuring him the car was OK, but there might be an issue with one of the rear wheels. The owner's response was that the car had been checked, mechanically sound and in good shape when picked up, so if any problems arise, it is the driver's responsibility! 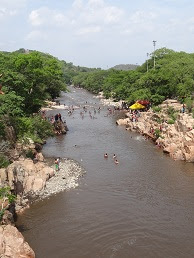 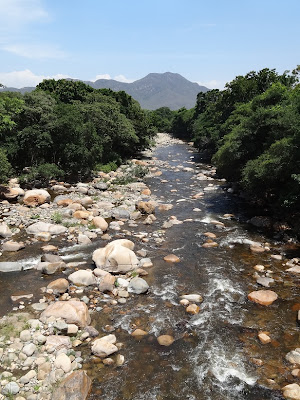 The following day, Katherine and I left Valledupar continuing on toward Macao and then Riohacha. At this point we are trying to be very gentle with this car, driving cautiously over speed bumps and potholes and going no more than 70km/h (40mph); hoping the car will make it back to Cartagena but it's a long way home! At this point we are debating to continue on to Macao as planned or take a detour to Riohacha but the universe made the decision for us, leading us on the road to Riohacha instead. We are now in the middle of the desert passing through a few small Native American Indian villages in the state of "La Guajira" when we hear a strong friction coming from the left rear axel. The noise is so bad we are forced to stop because the wheel will no longer rotate. It must be the wheel bearing! But how in the world are we going to find a mechanic in the middle of nowhere that can replace a bearing? Leaving no choice, I jacked up the car, removed the rear tire and brake rotor, located the wheel bearing and sprayed the heck out of it with WD-40, until there was a smooth consistent rotation. Thanks to WD-40, this quick fix got us going again! However our new concern is how much longer can we go before the lubrication dries out? Believe it or not, this little "city car" made it another 120 km (80miles) to the skirts of Riohacha before it stopped again, at sunset. The same procedure was performed, however this time we got lucky and a tow truck driver nearby happened to have grease (WD40 heats up with friction but grease is more tolerant with heat and better in this case). In need of a mechanic, we stop at the first gas station to find the person we asked was a owner of a mechanic shop just across the road. It was too late to get a new bearing, so the car was at the shop overnight and the owner, Evardo gave us a lift to a nearby motel. The following day the car was repaired and we were ready to take off again! Thankfully labor and parts are reasonable in Colombia and it didn't cost more than $60 for the whole thing. Thereafter we contacted the rental company and got to keep the car one extra day instead of getting reimbursed for the repair.
Riohacha is a small coastal city and the first port you can check into, coming from North on a boat. This city is mostly populated by Native American Indians. Their high quality hand crafted bags, hammocks and jewelry are sold by native artists or at street vendors for half of what it would cost in Cartegena. Through out this trip, we noticed that every village had something to offer, anything from tropical fruits to gasoline from Venezuela, fresh fish caught from the local river or our favorite, a shot of black "Colombo Cafe" all available on the road side. The car was filled up with gas four times, out of which, two times gas from Venezuela. A gallon of fuel costs around $5 per gallon at any gas station but on the side of the road close to the Colombia-Venezuela border, you can find it for as cheap as $2 per gallon!

On to Tyrona National Park area some of these roads felt like tunnels, since the large trees acted like canopies over you. The routes throughout this part of Colombia are mostly trafficked by busses and trucks. Furthermore they are highly controlled by police and military. At these roadblocks you must drive slow and be prepared to stop. You might be asked to show car documentation or searched. This happened to us twice and we kindly cooperated. After the first day, we learned how to make the smooth pass through security check points. All you have to do is SMILE, make eye contact and give the "thumbs up signal" for a smooth pass.
We arrived at Tyrona National Park just shy of the gates closing time at 5pm. Now realizing it's almost dark and we have no dinero and no plans. With a quick run through Santa Marta we hit an ATM and grabbed some street food. Neither Katherine or I wanted to spend the night in the city and were determined to wake up in the Mountains. There is only one road available at this time up to Minca. Don't try this at home folks! As crazy as it sounds we continued to drive an hour up the mountains on half paved roads with no signs. It's not really wise to travel up elevation in Colombia at night with a small city car that is not made to go off-road, let alone broke down earlier that day! As Katherine and I are having this discussion, in the middle of the darkness in the jungle, she starts to feel sick and is possibly food poisoned from the street food. She emptied her stomach on the side of the dirt road as dogs from close by houses were barking at us. At this point, I'm very concerned and don't know if we should turn around to Santa Marta or continue to Minca. We don't even know if there will be a place to sleep once we get there. Our intuitions pointed up the mountain and worst case scenario we sleep in the car!
We got to Minca at 21:30 to find it a ghost town, nobody was around and nothing open! We drove into the Minca Hotel hoping for someone to be there but no luck. I parked the car, leaving Katherine to rest and started walking to find something......anything! I'm nervous and concerned and asking the higher power to open a door. Miracously, within a few minutes, there was another quaint Hostel but the gate is locked and a dog is sitting by it. I'm hoping the dog would bark, so the owner comes out, but she continues to sit quietly and wanted to be pet.
All the lights were off, but a tv seemed being on in the house. I shake the fence a little bit and started talking to the dog and a gentleman peaked out from the second floor. Fernando, the owner of "El Mirador" came down the stairs and in broken Spanish I asked if it's possible to get a room. He unlocked the gate and invited me with open arms. Fernando offered us a room with a spectacular view over Santa Marta. This building is vacant of guests, leaving the whole place just for us. While I went to get Katherine and drive the car up the tiny steep dirt road, Fernando had woken his wife and the two were preparing dinner for us. This couple were so hospitable, friendly, and giving that made one emotional. Within a short time we found ourselves in paradise, it was a miracle.
The following day we went to "La Victoria" Coffee plantation build in 1892.  This plant was still in operation with the same original machinery imported from UK and the US. Three different generation of people were working here, Yeimi was our tour guide, her father was working as an engineer, and her grandfather was the plant manager. They all lived within close proximity to La Victoria.
Last time I visit Minca, we went to an amazing tranquil water fall and this time we dip ourselves in cold fresh water by another beautiful waterfall. The visit in Minca topped off the highlights of this road trip. 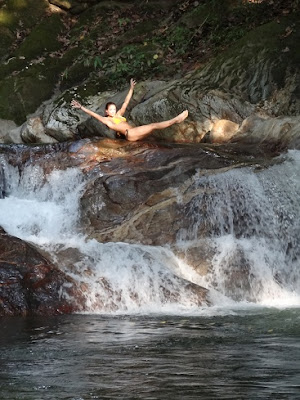 Another few days in Cartagena and we are ready to set sail toward San Blas, Panama. My cruising friend Marius aboard "Chiron" is hauling out in Cartagena and going back to Norway and our paths are separating for now. Some electronics on the boat are on their last breath and destroyed by the salt and humidity, lets hope they make it till end of this leg.
Love from Colombia

Posted by George Kalhouri at 8:45 AM