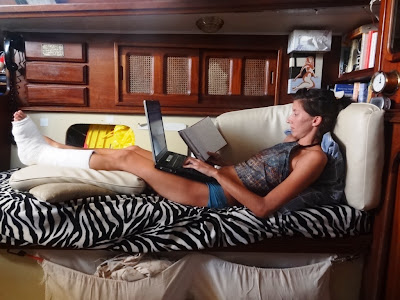 It was a hot day (duh!), the middle of the day, when the sun is highest in the sky. We already had lunch and I fell asleep reading a book that I’m not really interested in, but I’m trying to get through anyways. When I opened my eyes I knew I needed to jump in the water to refresh myself. I asked Nico and George if they’d like to swim to the beach with me and swing on the rope swing. George passed; he said he wanted to finish writing something for the blog. But Nico seemed enthusiastic and put his book down, and within moments we were on our way. Since we’ve been here at this anchorage we are a perfect distance to swim to shore and also are able to see the locals and visitors swinging from the tall palm tree. When we got there, the smaller palm had younger kids swinging from the rope, and the bigger kids, if able or crazy enough to, climb up a steeper palm to swing from a taller height. A young man went before me and showed me how to climb up. I threw the line up to him and he swung a few times almost knocking into the tree on his back swing, but then finally let go of the rope while he was over the water and landed smoothly. After watching him, I figured I was ready. Once I was up the hand made steps on the palm, I felt the adrenaline kicking in, and that in itself is a thrill! He passed the rope up to me and at the same moment, I remember Nico had swung from the lower palm first and after a few swings he let go over the water but the way he landed in shallow water, had hurt his tailbone. So my reasoning is, if I let go of the rope on the first swing there won’t be the possibility of banging myself into a palm on the way back and that I’ll have more momentum to get myself over deeper water. That wasn’t the case… I landed in less than 4 feet of water just under waist deep. I felt the ground, and I felt it hard on my feet! I collapsed under the water and knew I had hurt something, my feet were throbbing. So I lengthened my body on the surface of the water, supporting myself with just my arms. For the moment, I was trying to figure out if I could even stand. I couldn’t. The thought of even touching my feet to the ground made them hurt. So I pulled myself up the sand, my feet trailing behind me, and then turned to face the water. I yelled out to Nico, up by the swing, to not let go of the rope, we didn’t need another minor casualty aboard!
3:45pm
Mike and Rebecca from Zero to Cruising had just arrived on the beach. They came over to me because they wanted to ask how the swing was. I told them & Nico I hurt myself bad. I didn’t want to make a scene so I kept calm.  At this point I felt my body going into shock and I was shaking from the amount of pain I was feeling, mixed with the adrenaline. I couldn’t put any weight on my left foot, and my right foot could take a tiny bit, but not much. Then we look up and see George getting in the dinghy to come to the beach where we were. He knew something was wrong. He later told me he had looked out at us to take a picture and saw me lying on the beach with everyone crowded around. George gets me in the dinghy and Nico swims back. The pain is now so powerful I’m worried and don’t realize much of what’s going on. Thank god we have ice to put on my left foot right away. It melts quickly and Rebecca rides over in there dinghy to bring us more. I’m still salty and wet, and full of sand, so George helps me rinse off and get into clothes. We joke that now he can pick out the panties I’m going to where! The swelling continues and pain persists, we decide it’s time to go to the hospital. I had taken some Paracetamol which is a pain reliever but a weak anti-inflammatory. Luckily we have a handy-dandy Marine Medical Kit aboard and find a multi-purpose splint and ace-bandage to stabilize my left foot for the dinghy ride. Then the fun part… getting to the hospital.
4:30pm
We have to get me in to the dinghy first, which isn’t even easy when you’re not gimpy! The ride to shore was a success, although I did get a little salty since we were heading straight into the wind. When we get to the fisherman’s dock, which we heard is the closest to the street the hospital is on; George carries me to the 1st intersection. It’s the busiest one in the village so there’s a chance to catch a ride quickly. Everyone is staring at us wondering what had happened. We obviously had concerned looks on our faces! A local woman points to a “bus” across the street that is dropping off a full load of people. George carries me over and I pull myself in the side door. The buses here are more like passenger/ minivans. We are relieved that the driver can take us up the steep street quickly, because I wasn’t going to make George or Nico carry me all that way! We arrive at the drop off area of the hospital, go in, and see no-one.
5pm 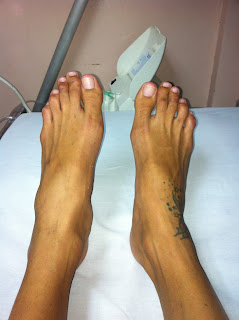 George sets me down on some benches so I can keep my foot elevated. He and Nico look around for someone, anybody! Finally, there’s a nurse in a separate room and he brings me to her. They put me on a gurney and she un-wraps the ace bandage and takes a look at my foot. It’s absolutely awful looking… swollen, bruised, and puffy in the strangest spots. I didn’t even recognize my own foot (Except for the long gangly toes!)! The nurse then called the doctor and he arrived within 20-30 minutes. He took a look at my foot inspected it a little, and said I needed an x-ray. The hospital here in is not equipped with a computer, let alone an x-ray machine. So they tell us I have to go to (the capital) which happens to be on the south end of the island 50 miles away. Luckily, they have ONE ambulance in town and it can take me and one other person.  We had our handheld VHF (we always take with us) and call Mike and Rebecca to ask if they could pick up Nico from shore so we could leave our dinghy at the dock for when George and I get back.
6:15pm
From the ambulance, the sunset was stunning that evening and we were fortunate enough to see it from an elevated height up on the road that ran along the lush mountainous coast.
7pm
When we arrived in , the emergency area had a ton of different people waiting in wheelchairs, stretchers, and standing everywhere. Complete with crack heads that were quite enterntaining! The nurses all dressed in white uniforms, with white stockings and even white nurse hats. It was like right out of the movies! So I waited in a wheelchair since there weren’t any benches. Waiting… waiting… waiting…
9pm
I was called into a room where a doctor, a student doctor, a nurse, and a “higher up” doctor were. They started discussing 3 different patients x-rays. All the while, I’m still in so much pain and just want an answer. Is it broken?  Will I need surgery?  Maybe it’s just a sprain? The top doctor informs the other doctor, while holding up the image of my foot, that mine is a fracture. A WHAT?! Yes, a fracture… heal fracture, that is. Shit! All these thoughts start going through my head: How am I gonna do this living on the boat? How am I going to get crutches? How am I going to shower? I mean, I wash myself by jumping off the back of the boat! How am I going to sail? How am I going to get to and from the dinghy? I’m overwhelmed with the news. 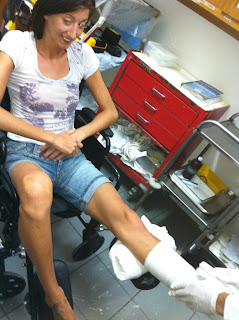 9:20pm
A cast for 6 weeks they tell me…
It’s finally time to get the cast, or should I say; time to go to art class with paper machete. Seriously. The 2 student doctors put this cast on and I’m pretty sure I could have done it better myself. This cast is from right below my knee down to the second joint in my toes. I’m alright with that part, because he said it will keep the joint in my ankle from bending, but I didn't get to pick the color! ;) It was soft in some spots until 48 hours later I was able to get it re-enforced at the local hospital back here in . No worries now!

1am
Yes, you read that correctly; we waited this long for the next available ambulance to take us back home. I’m still in pain and uncomfortable. The ambulance ride back home wasn’t very pleasant. The driver drove so recklessly that is scared us. The roads here are steep and narrow which is not a good combination for speed. In the back of the ambulance I’m bracing myself on the gurney wishing I was strapped to it! I don’t want to ruin the cast that hasn’t even cured all the way! Next to me, and extremely concerned, George is on the bench, holding on for dear life so he doesn’t crash into me!
1:45am
When we arrived, George again carried me down the dock to the dinghy. (Man! Good thing he's strong!) The moon wasn’t out so it was unusually dark and the ride back to the boat was cold and windy.
2am
Finally home. Exhausted and starving. What a day! I’ve never had a cast, so I don’t know what to expect, except that this is going to be an uncomfortable 1st night. Even though I’m worn-out, I can’t sleep. The swelling in the cast was very uncomfortable and I toss and turn all night. I’m officially a cripple. I’ve always taken my 2 feet for granted. Now I truly appreciate the ability to walk naturally with both legs and feet, especially considering my “active lifestyle”.
After 3 days of careful consideration, George and I have decided it would be best for my recovery that I fly back home to . Firstmate Bailey will be departing early this season :(....
Posted by George Kalhouri at 12:18 PM