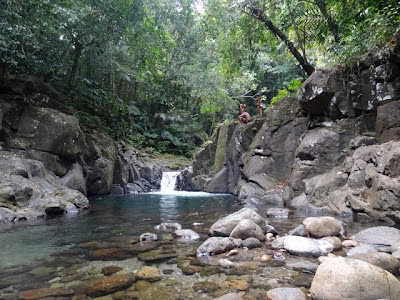 Dominica is one of the smallest countries in the world with a population of 73 thousand. People live very simple lives here. There is an abundance of fresh water, but not necessarily every body has running water in their households. Water faucets are on every block and that’s where we fill our tanks as well. The nominal GDP per capita is only $5200, which doesn’t mean much, because there is plenty of food and no body starves here. This country grows enough food for millions of people. Many of the islands in the Caribbean import vegetables and fruits from Dominica. Last year, in the mountains in the DR, we bought a water melon from a street vendor, which was imported from Dominica. Dominican Republic and Dominica sound similar and can be confused, they are 2 different countries, both in the Caribbean Sea, but 450 miles away from each other. This land’s soil is extremely
fertile. Most of the Islands in the Caribbean are volcanic and Dominica has 7! The hills and mountains are lush, green, and almost anything can grow here. The locals joke that you toss any  seed on the ground, it grows. There are many tropical fruits that I have never seen or eaten before, such as the custard apple. A few days ago after dropping off Kelly at the airport, we visited the Carib Territory. A custard apple tree got our attention and the family that lived there invited us to try the fruit, which was very creamy and sweet.
Caribs are the original inhabitants of Dominica and their territory is on the east side of the Island. Their facial appearance is asian and lighter in color, however, they have been mixed with the Africans over the last couple hundred years.


Dominica has been nicknamed “Nature Isle of the Caribbean” because of its unspoiled nature. There are an extensive numbers of rivers, waterfalls, and springs. We have hiked to several waterfalls and some were totally deserted with not a single soul around.
There are hot springs and cold boiling springs. Last week, we biked to a hot spring that supposedly only locals know about it. The hot water was running out of a cliff into a pool, where we took a dip. It was just like a jacuzzi, but all natural, in the middle of the wilderness, surrounded by tall trees with the sounds of chirping birds and running water. A great place for meditation!
Since the arrival in Dominica, Earthling has been anchored in one spot, Portsmouth. This is the best place to anchor and explore the island by bus or rental car. Most sailors hire a boat boy/tour guide, whom offer yacht services, they bring ice, water, fruits, and they will take you on the Indian
river and other tours. We employed Martin who goes by “Providence”. He has been a professional guide for 25 years and has a great reputation. Martin has been telling us where to go or what to visit and during the time Kelly was here, he would come by and check if she needed anything. Moreover, you can do lots of activities on your own. From Portsmouth you can walk or hike to waterfalls, rivers, springs, and so forth.

So far Dominica is my favorite place in the Caribbean, mostly because of it’s unspoiled nature, waterfalls, rivers, springs, fruits, people, and inexpensive food.

Love from Dominica
View the photos Album of Dominica on the fb page.
Posted by George Kalhouri at 2:06 PM