The French Islands in the Caribbean have more of a European culture than the other Caribbean Islands. What’s interesting is that Guadeloupe and the other French islands are still 100% under French control and you actually enter the European Union even though you are not in Europe. Furthermore, if you don’t speak French, you might have difficulties to connect with Locals. 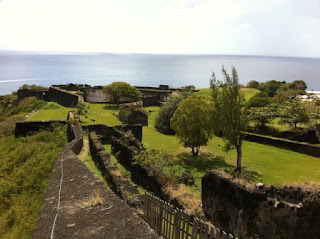 We have already visited Basse Terre, which is the capital and the second largest city in Guadeloupe. We explored Basse Terre on a Sunday, which means everything is closed and the city looked like a ghost town. The streets were empty which gave an opportunity for all the graffiti to stay out. The graffiti is beautiful on the walls here and we were able to experience a couple of locals that were spray painting a new white wall.
Luckily, Fort Louie was open on Sunday and the view from the top of the fort is absolutely magnificent. Fort Louie is just a 10min walk from the Marina and it’s a place worth to visit, in addition there is no entry fee! 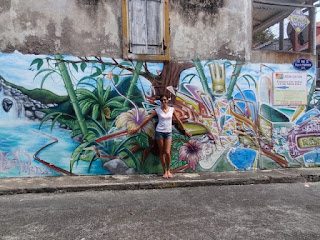 The last few days, it has been blowing around 20 mph, with wind gusts at 35+mph. So windy that the wind generator shuts down. The passage from Basse Terre to The Saintes was only 10 miles but we were washed over a couple of times. Iles Des Saintes is a group of small islands off the southern point of Guadeloupe. The highest elevation is a little over 1000ft. We hiked up there to a tower where you have a 360 degree view over all The Saintes. The pictures we took from here look just unreal. The airplanes  were flying lower than us to and out of the airport!
The main transportation in The Saintes used by locals and tourists (who are mostly French) are scooters. Furthermore, you see lots of goats free roaming on the small streets, and beautiful birds flying from tree to tree. Another interesting animal that is free here, are cats, they just come right up to you meowing and wanting attention. Kelly hopes that one of these days one will follow us all the way back to the boat.

We had to be on schedule and sail to Point a Pitre to pick up our friend Nico that flew in from LA. Traveling on a schedule sometimes can be challenging. Cruisers dislike very much to have a schedule! The weather was not in our favor. An hour into the passage from The Saintes to Point a Pitre, we got hit by the first squall, where winds were recorded over 30 mph for a few minutes. Luckily, the mainsail was double reefed before the anchor was up, but we still healed over heavily and did a high speed of 8.7 close haul. She was washed over several times in the 8-12ft swells. Then, we hit a second squall. At this point, Kelly was scared for the first time with tears in her eyes. After that, the winds came down to 18-20.

We finally made it safe to Marina Bas Du Fort midday Tuesday. Earthling has not been docked in a marina for 3 months. There are several tasks to do when in the marina. Batteries had to be equalized on shore power, scrub and rinse entire boat, water tanks had to be filled, we had to pick up a guest, and do some provisioning. This is the first time I’ve done a Mediterranean-style docking and it could have gone smoother. The dock lines were too short and space to pull in was tight. It only cost 25 Euros for us and it included; water, electricity, shower, and wifi. Shortly after we were docked, “Lucky Luke” came in to dock next to us, he pulled in stern-to and as Alexander was trying to fit his 47’ Bavaria into the tiny spot, his wind generator hit ours and it broke two blades. That was an unfortunate event. However, a good friendship started. Alexander was very kind and he right away offered to cover for the damages. Later on that evening we were invited aboard “Lucky Luke” for drinks and dinner. On our port side “Area 51” is docked. On the starboard is “Lucky Luke” looking for the Daltons and he found a Dalton on Earthling!

View the Guadeloupe photo album on the fb page
Posted by George Kalhouri at 11:43 AM