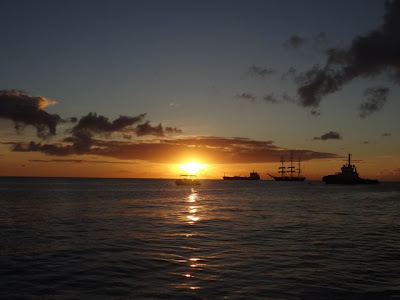 Statia is only 20 miles southeast of Saba. With the Easterly wind, it took us 7 hours to get here. As approaching this Island, we see barges, tugboats and a couple of tall ships on anchor. I felt an energy of industry and commercialization. St. Eustatius is still under Dutch influence and there use to be a lot of action in the mid 17th century. Apparently, it was the trade capital of the Indies during this time. Even today, Statia seems like it has more cargo traffic than most other Islands around this area. There is only one good anchorage outside of Oranjestad and there are moorings available free of charge when you check in with the marine park. 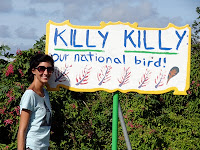 Every time we get to a new place, I take out the binoculars and check out what’s up on land. I look for where we can land the dinghy, and scope out the scene. It’s fun to look at a place that you have never been to from a distance by water. As I’m watching the shore, I capture a tree full of white-birds & Egrets. Suddenly, two larger Parrot-like birds fly out the tree and start to chase two Egrets away. The Parrot-like birds were green and red and just so unusual. I’ve never seen anything like it before! Later we learned that they are the national bird of Statia, called the “Nahamaya” or also known by the sound they make “Killy Killy”. Kelly was so excited to have a bird named after her! 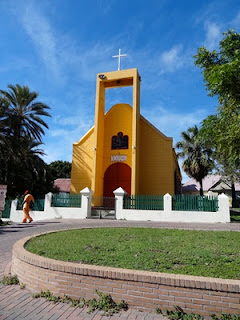 In Oranjestad, there seems to be an underlying theme of Orange. You see an orange church in the middle of the town. Also, if you pay enough attention, people like to dress in orange, you see orange houses and even their curtains in that color.  We didn’t see  many orange fruit trees though! Orange is such a popular color here because it is said to be a royal color for the Dutch.
Just up the hill from Oranjestad is the Quill. Like most of the other Caribbean Islands, Statia is volcanic. The Quill is an extinct volcano with a large crater. As adventurous as we are, we just had to hike up to the crater. Along the hiking trail, we saw a couple of  snakes (Red Bellied Racers) that were a few feet long. They’re not known to be of any danger, but we still didn’t try to pet them! On the Quill, most of the vegetation is bushy and just a few feet tall, but we did come across some huge trees that must have been a few hundred years old. In addition, we saw many tropical plants, with flowers that have natural medicinal qualities for different kinds of diseases. The Periwinkle, (Catharanthus Roseus) makes medicine that cures diabetes and malaria. I wish I could have collected more of their flowers for some of my dearest friends and family that have diabetes.
Moreover, there were many wild chickens and roosters up on the rim of the Quill crater. When we got there, one of the chickens fell in love with Kelly and followed us around and almost came down to the boat with us. Maybe the chicken misunderstood Kelly with Killy Killy!

View photos of Statia on EarthlingSailor’s page on Facebook

Posted by George Kalhouri at 12:34 PM