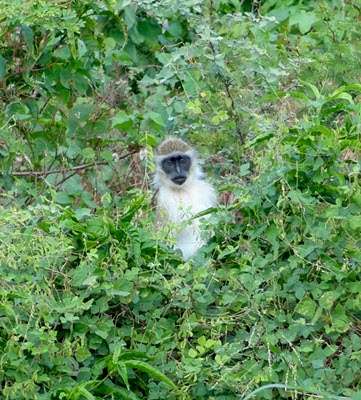 I was wondering to myself, wouldn’t it be crazy to have a monkey as a pet on the boat?  I’ve seen it in movies and that’s how the African Green Vervet monkeys originally came to St. Kitts and Nevis. There are more monkeys than human beings in these two islands. Everywhere we go, in the forest hiking or biking, we see monkeys. You don’t see many of them freely in town, Basseterre or Charlestown, but as soon as you enter the nature, there is no way to miss them. Many locals even have monkeys as pets and we have seen some in cages, but majority live freely. We get so excited every time we see monkey families out in the forest. They are fearful of humans, as soon as they see you are walking towards them, they run away and hide. The trick is to stand still as soon as you get sight of them, keep your voice down and move very slowly. It feels like being in an Indiana Jones movie. 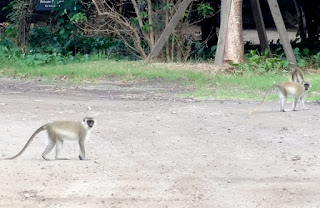 Monkey’s are somehow taking over these islands, they are destroying crops and vegetables. This is a major problem and the representatives don’t know how to control the monkey population. Our good friend Christian in St. Kitts said; put them on the menu! Which is a joke but not completely! There are people that eat monkeys and I probably would too in a survival situation.
The Monkey jokes started the first day we got to Basseterre, St. Kitts at the check in. I said to the lady at the immigration, I’ve heard there are lots of monkey’s here! She replied, yes many, there is actually one in the office right now! I thought she had her pet with her but I realized she was referring to her colleague. So I said, there is a white and a brown monkey here too, referring to Kelly and myself! We all started laughing, calling each other monkeys. Since then we have been pointing out our monkey characteristics and gestures. Monkeys are very stubborn and funny, so is Kelly. They climb trees and are happy, and so am I!

Everywhere we go, we find amazing people. Earthling has been in St. Kitts and Nevis the past week and we’ve met some great people, like Christian. We met him by the dinghy dock along White House Bay where we were taking pictures of the sunset. We found each other being at the same energy level and it didn’t take long before we made plans for the following day. Christian or “Trinny” is a hospitable person that was generous since the first sight. The next day, we biked from White House Bay to Basseterre, up and down the hills (75min) to go and meet Christian by the cruise ship dock. From there we started our tour around the Island along with 14 British tourists from the cruise ship. In Basseterre, there are enormous cruise ships coming in  every morning and leaving at sunset. During the day the Island is full of tourists and after sunset you see mostly just locals. Christian runs his own tour bus called Tangerine Tours. He is very knowledgeable of the Island. He is well spoken, kind and respectful. He offers all his passengers complimentary rum drinks, beer, and soda. We had an excellent tour of St. Kitts and Christian is the best guide you can have. Trinny is a very colorful man and can’t be missed. If you ever come here, try to see him. Our tour day ended with Christian and his friend Dr. Gonzales aboard Earthling for a perfect sunset and drinks. During the whole day, Christian did not allow us to pay for anything, including his tour, lunch, or all the beverages we consumed on his bus, he actually brought some goodies with him to the boat.
Love from Monkey World
Posted by George Kalhouri at 9:48 AM