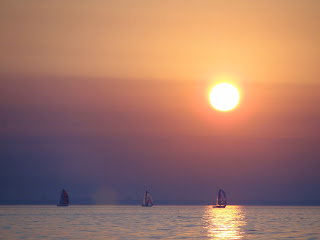 The 103rd Mac race was a race to remember. This Mac race was one of the fastest and the most tragic. No one ever has lost life in this event, but unfortunately this year we had 2 fatal incidents. May them rest in peace.
The race started with south winds and we had the spinnaker up for most of the 49 hrs 20min, we recorded the highest speed of 12.6 knots and almost never saw any speeds below five. After a day of racing the halyard to the spinnaker broke and we almost dropped it in the water.
Thirty hrs into the race we were informed that a storm is coming our way. Now we have to get ready for the storm. There are two main helms men aboard, Randy Hastings and Jim Clauser. Randy has 23 Mac races under his belt and Jim 27. Both very experienced skippers. Jim is so talented behind helm, he sailed through 60-80 mph wind with full main & a small Jib. The storm hit us with heavy rain and high winds. It was like a wall of wind hitting the boat. The winds were so strong that you would think the mast and rigs would come down anytime. My shift on deck ended 20 min before the storm but I liked to be on deck & experience heavy weather. While I'm laying down & looking at the lightning outside I thought I should put my gear on & go up! But then why should I, to get wet and put myself in danger. We have enough people on deck anyway. It was lightning continuously for few minutes, the whole lake and sky was lit up. You almost needed sunglasses, that's how strong it was. From inside the cabin it looked like we were struck by a star war in the space.
Right after the storm, we heard on the VHF radio that a boat was capsized and 2 people were lost. It was a very surreal moment of chock and sorrow.
Some boats were hit so hard that they drifted 10 miles backwards. We finished in the middle of the fleet, part of the faster pack. I look at it as we all won since we accomplished the race. It's not about taking the first place, you can be a winner without being first. Aboard Joie De Vie, we had 8 crew members, next to Randy, Jim, Lee & I, there were also Duane, Kerry, Ilya, & Garret. The crew worked great together and we all had a good time racing.

Mackinac Island is a beautiful island. There are no cars or motor driven vehicles on the island. The main form of transportation is horse carriages and bicycles. I bicycled around the Island 13 years ago (first year I moved to the U.S, Kalamazoo, MI).

This island has a strategic location on the strait of Mackinaw between Lake Michigan and lake Huron and lays between the lower and upper Michigan. The Grand hotel is a must see on the Island and the Rum party for the Chicago-Mac race is held in the hotel's front yard every year. You can not miss the Mackinac Fudge during your visit on the Island. Being on Mackinac feels like stepping back in time.

The delivery of Joie De Vie back to Chicago is a also a highlight. Lee, Jim, & I left Mackinac Island Wednesday morning. First port was Leeland, MI, & then Manistee, and now we are crossing Lake Michigan to Sheboygan, WI.
The sand dunes on the eastern coast of Michigan is spectacular. It's hard to believe that there are so many beautiful beaches and dunes in Michigan. View the full photo album on Earthlingsailor's facebook page.
Love from Joie De Vie
Posted by George Kalhouri at 1:20 PM